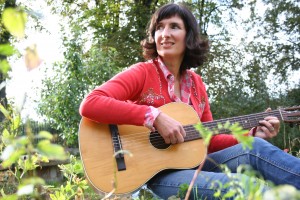 ‘Akin to an old Brill Building songsmith, Carole King couldn’t have come up with a better pop song’ – Mick Houghton in UNCUT ****

Singer-songwriter Rebecca Hollweg has just released her 3rd album of melodic songs, ‘Country Girl’, described by UNCUT magazine as ‘another delightful batch of tunes,’ and given 8/10.

Rebecca has played venues and festivals all over the UK and Europe, from Ronnie Scott’s and the South Bank Centre, to Glastonbury Festival, Latitude and Moseley Folk Festival. She has played in Crete, France, Germany and Holland, and has toured major theatres round the UK as support artist to Roger McGuinn of The Byrds and Paul Carrack of Squeeze and Mike & the Mechanics. She is a regular musical guest of poet and comedian John Hegley.

For the second year running she played a series of concerts in South West France in summer of 2017.

Rebecca has many loyal and passionate fans of all ages and backgrounds.

Her music is most like that of James Taylor, one of her major influences, and her songs and special voice connect with people.

She writes about things in her life that are important to other people too. Listening to her play live, one audience member described as ‘like being enfolded in a warm embrace’.

Her music has folk, country, jazz and pop influences and she is an accomplished singer working with a band of exceptionally good musicians. She accompanies herself on acoustic guitar, and works with her husband Andy Hamill,a highly respected bass player who has worked and recorded with many big musical names (including Laura Mvula, Rumer, Eska, Natacha Atlas, Mark Murphy, Nitin Sawhney, Omar, 4Hero and Kylie Minogue).

PAST VENUES PLAYED INCLUDE:

Plus supports for LYNDA LEWIS, THEA GILMORE and CARLEEN ANDERSON and double bills with JEB LOY NICHOLS and EDWINA HAYES.